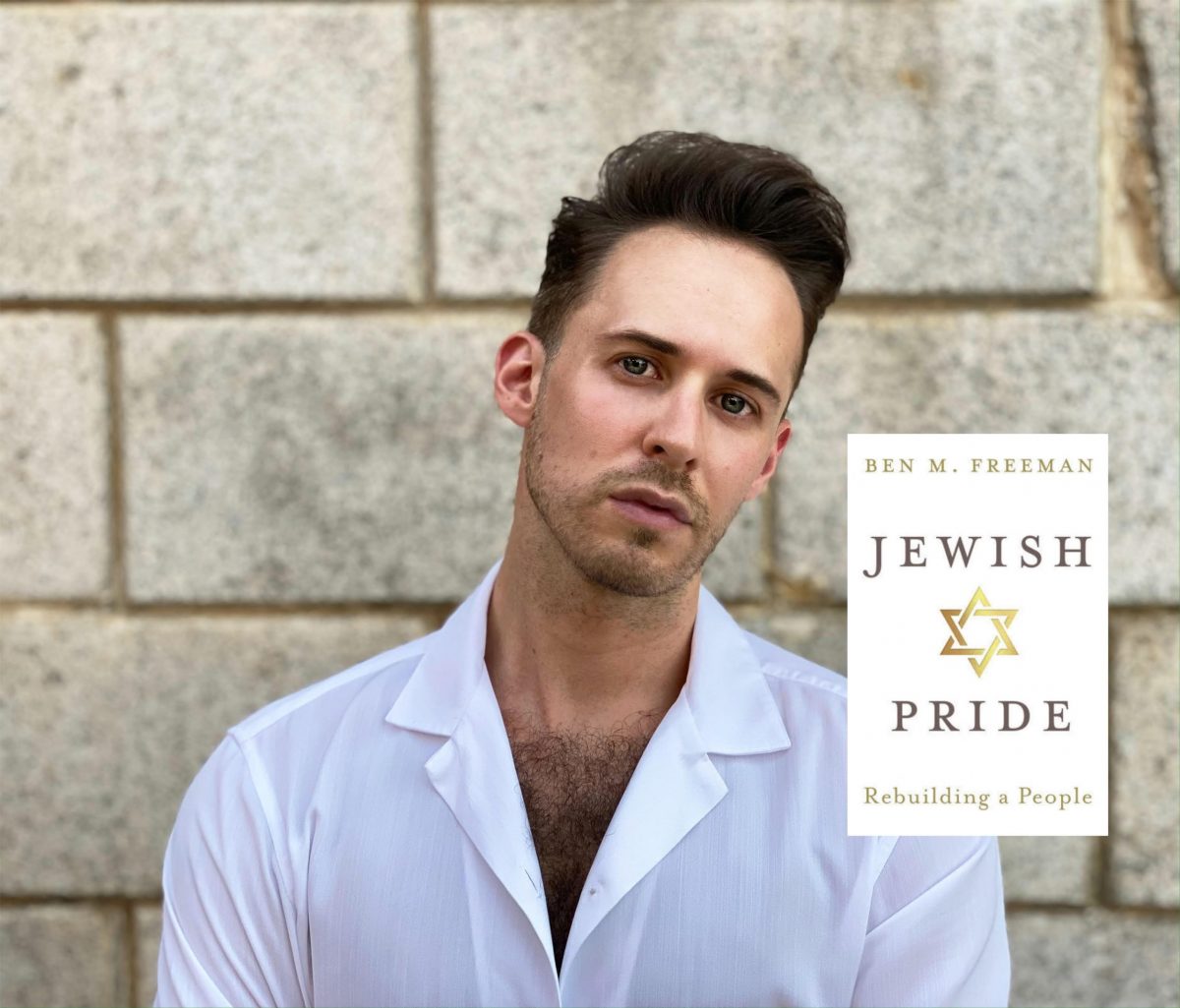 For years, Ben M. Freeman has taught about the Holocaust all throughout the world, most recently in Hong Kong where he lives and teaches history at an international high school. Now, he is sharing his expertise and passion in his new book, Jewish Pride: Rebuilding a People. In the book, Freeman draws on his own experiences in the LGBTQ+ community, imparting on the Jewish world the power in rejecting the shame of antisemitism imposed by the outside world.

Freeman was raised in a tiny, traditional Jewish community outside of Glasgow, Scotland by parents that instilled a great sense of Jewish pride in him. “My parents helped me navigate the non-Jewish world. I remember my mother sitting us down and saying, ‘When you leave this house, you are ambassadors for the Jewish people, and you’ll be judged as a Jew.’ My parents were so proudly Jewish,” he told A Wider Frame. Freeman dedicated the book to his mom and deceased father. “I could have never written this book without them. It is a bit of a killer that my dad will never read it and I still need to come to terms with that.”

The book also would not have been possible without his identity as an LGBTQ+ Jew, Freeman shared. “It was very much born from my own experience. I had to work incredibly hard to become not only comfortable with myself, but proud of myself.”

Freeman also said he can look at the past mistakes and missteps of the LGBTQ+ community (such as “toxic masculinity, the demonization of effeminate men, gay-cism [gay-racism], and antisemitism”) and learn from them. “We have a lot of problems in the gay community. So one of the things I talked about in the book is diversity and that’s from this specific experience. I want us to not repeat these mistakes. It wouldn’t have been possible without my experience [in the LGBTQ+ community].”

Shame is an internal weight with which Freeman believes the Jewish community has not come to terms, but that he had to process as a gay man. “I cannot explain to you how much shame I felt. I talk about suicide attempts in the book, I talk about self-harm. I decided when I was like 16 or 17 that I was going to kill myself at the age of 25. Because 25 is the last stage where I can reasonably not have a girlfriend without people asking about it—which is so arbitrary, it makes no sense. But I felt so much shame and, in the gay community, we understand the shame, the trauma. And Jews experience shame too and we have to start talking about it and processing it and giving it space.”

“We [as Jews] can be inspired by how vocal the [LGBTQ+ community is]. We have absorbed the shame. We have absorbed internalized trauma. I used to hate it when I would tell people I was Jewish. I was embarrassed. I would always qualify my Zionism, qualify my Jewishness, and it’s gross—and it’s a sign of shame.”

Though the book deals with antisemitism, it only does so “from the perspective of understanding [the Jewish] experience with it and rejecting it and rejecting the shame that goes along with it.” “Antisemitism is not a Jewish problem,” Freeman said, “just as homophobia is not gay problem and misogyny is not a female problem. These are problems which impact those respective communities obviously and which devastate us, but the roots of antisemitism do not lie with our community. However, antisemitism has an enormous impact on our social and emotional welfare, our collective and individual self-esteem.”

He gave an example of the incorrect independence of antisemitism and racism, in his view. Freeman argues that “antisemitism is anti-Jewish racism” (emphasis added). “Antisemitism is a form of racism because when people hate us almost nobody hates us for anything that has to do with the religion. It’s never about the theology. It’s always about our biology, our souls, our inherent characters. In the U.K., we [clarify the type of racism]: anti-Black racism, anti-Asian racism, or anti-Jewish racism. People don’t use the term ‘racism’ only to refer to prejudice against Black people.”

When asked about the current climate of hyper-partisanship and the inability for many to call out antisemitism on their own side of the political aisle, Freeman had a lot to say. “Defining antisemitism via its source is often very reductive. I have a full section in the book about using Jews as a political football, which is very much connected to history. We’re seeing Jews and concepts related to Jews being used to define identity. For example, if I’m a Republican, you’re a Democrat and I say that ‘you’re an antisemite,’ what I’m actually doing is utilizing the association of antisemitism to frame myself as the good guy. Antisemitism exists on both sides of the political aisle and it’s dangerous to claim otherwise. In the book, I give examples from the left and the right.”

Freeman’s book will serve to fill gaps in Jewish education, which, in his opinion, has largely failed the Jewish diaspora. “There are almost nations of Jews who do not understand their own identity. I want to be respectful to those that came before us because they were doing what they thought was best. With that said, I think Jewish education has failed in certain ways, and I say that as an educator. We don’t teach about our history from a historical perspective. We teach our history from a religious perspective. It has failed to tell us that we are a people, that we are a nation, that we’re an ethnicity, which has always been a vital component of our identity. It only stopped being so because we were trying to drop it to circumvent antisemitism. We have an enormous responsibility and 4,000 – 5,000 years of peoplehood is in our hands, and how we respond and how we proceed will impact whether we have another 4,000 – 5,000 years.”

Jewish Pride is an extension of Freeman’s efforts on social media, which he believes is a useful tool for the Jewish community. “Social media is remarkable, and it has enormous power. It can also be used to damage us, and technology always has, but it has enormous benefits and an enormous potential. I think what [social media] is doing is allowing us, two thousand years after our expulsion [from Israel], to reunify our people and to really strengthen this concept ‘am echad’ or ‘one people.’  I use it to inspire, empower and educate because I see it as a responsibility. Ultimately there’s a huge limit [to what I can do on social media], which is why I wrote the book.”

Freeman’s book, though, is ultimately about a celebration of the Jewish people, a family that transcends time and space. “We should be proud inherently of who we are. We are each a thread of a much greater tapestry that connects us to 5,000 years of peoplehood. It is remarkable.”